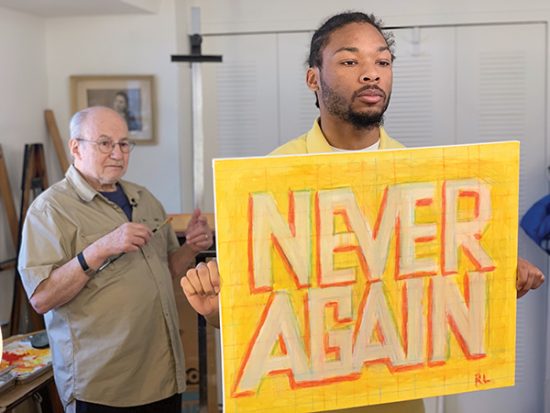 The Detroit Children’s Choir honors Curtis Bates, a #blackdetroiter, lyricist, and now an Ambassador for local Holocaust Survivors. After visiting with the survivors and hearing their stories, Bates is helping to spread the word among the young generation and educate them about the history and horrors of the Holocaust. Bates is one of two young Detroiters who narrate these stories in a documentary “Shoah Ambassadors” produced by local filmmaker, Keith Famie of Visionalist Entertainment Productions. Bates wrote two songs in the film; one song was inspired by a painting created by Holocaust survivor, Rene Lichtman, who challenged Bates to write a song titled “Never Again.” “We agreed that it should be a call to action against all forms of injustice,” recalls Bates. “Aside from it being a song about the Holocaust, it also a song about ending injustice across all people so young people will hear it and absorb and take the message, carrying it into real life.”  Curtis Bates, you are an inspiration to all of us here at the Detroit Children’s Choir!

“Shoah Ambassadors” is being presented at prestigious film festivals around the country including the “SR Socially Relevant Film Festival New York” taking place in March 2022. Check out the “Shoah Ambassadors Trailer.”