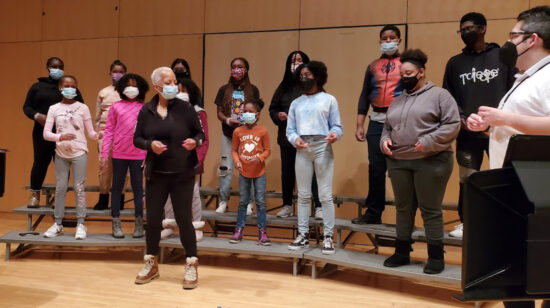 Ms. Gina Ellis visited with DCC’s Civic Choir on Saturday, 4/9/22, to help them incorporate some simple choreography into their Spring Concert performance. She will be assisting them for the next few weeks up until the concert performance scheduled for Wednesday, May 11th, 2022. 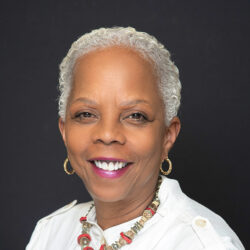 Gina Ellis, is a graduate of Cass Technical High School, Eastern Michigan, Wayne State University (MS), and Concordia University (MS). Gina danced on the commercial and concert stages in New York for 18 years.  She has had the pleasure of working and assisting choreographers such as Tony Award-Winning George Faison, Louis Johnson, Mike Malone, and Otis Sallid and has worked with performers, Cab Calloway, Diahann Carroll, Tremaine Hawkins, Debbie Allen, Melba Moore, and Denzel Washington, to name a few.  Ms. Ellis has appeared in the Broadway and National Companies of “The Wiz,” “Perlie Victorius,” and the European production of “Body and Soul.”  She was also the assistant stage manager and dance captain for the national company of “Five Guys Named Moe.”  Gina appeared in Spike Lee’s “Malcolm X” and HBO’s “Josephine Baker Story.”  Returning to Detroit in 1994, Gina worked on the Super Bowl XL as assistant choreographer for the Stevie Wonder pre-show.  In 2008 she was the recipient of MDC’s “Michigan Dance Educator of the Year.” Retired from Renaissance High School after 20 years, in 2015 she assisted and appeared in the 40thAnniversary of the Broadway and movie celebrations of “The Wiz.”  In 2019 she accepted a position with The Carr Center as Arts Academy Coordinator.